Over the last few years, the word green has become an all-too-popular buzzword that gets thrown around without much discretion or accountability. Specifically in the world of industry, it's somewhat counter-intuitive to be considered green while thriving on production and consumption; however, there are some companies, big and small, that are doing great things and taking big strides toward participating in the movement.

1. Bank of America A bank is typically considered the epitome of Old Business but Bank of America is no doubt doing their part in offering a necessary service while always considering the wellness of the Earth. Even as business increases dramatically, they boast a 32% reduction in paper use and a number of internal practices that earn them a green star; an internal recycling program that recycles 30,000 tons of paper per year, an employee incentive package that gives $3,000 cash back for buying a hybrid car, a new building that uses the heat from the groundwater to heat the building during the winter and other eco-upgrades that will power the facility while using half the electricity of its counterpart.

2. 7 Planet Spawned in the Great Northwest and centered on the concept of Mindful Commerce, 7 Planet is the first chain of green general stores. Their niche is simple; they believe that one should only consume when they are in need and when pressed, one should purchase the most mindful product available to them. Having done the research and believing in their cause wholeheartedly, they offer a collection of general organic and green products from handpicked suppliers that all follow strict environmental guidelines and ultimately share in the 7 Planet mission for Mindful Commerce. 3. University of Colorado-Boulder The students at the University of Colorado-Boulder deserve recognition because of their 40-year history as a notable soldier in the green movement. Independently organized, funded and operated by the students alone, the University's Campus Environmental Center has an abundance of programs in place that aim to reduce the school's strain on Mother Nature. Between boasting 1 bike for every 3 students, and the fact that their football games are zero-waste events (everything is recycled or composted), it is no wonder they've earned the Sierra Club's top ranking for Cool Schools. 4. Hewlett-Packard As one of the major tech companies in the world, it's a difficult task to balance your role as a supplier, as well as, an environmentally conscious entity. However, Newsweek named Hewlett-Packard the number one 'green' company amongst America's top 500 largest corporations because of its efforts toward a reduction of GHG emissions associated with its supply chain and its elimination of toxic substances from its products. HP's perfect rating was the cumulative result of their Environmental Impact Score, Green Policies & Performance Score and their Reputation Survey that considered a wide variety of environmental factors.

5. Figlio Restaurant Although the larger corporations seem to get more praise and/or attention for changing their ways and going green, the owners of Figlio, a restaurant in Ohio, have proven that small businesses can turn green into green. This Danis family restaurant started small with an internal recycling program and installing energy saving light bulbs but eventually grew into a bit more expansive vision by buying local produce to limit their dealings with long-distance suppliers that burn more fuel in their shipping operations. In addition, they've purchased clean energy credits that will offset the GHG emissions from their business by transitioning to a wind/solar powered energy program. 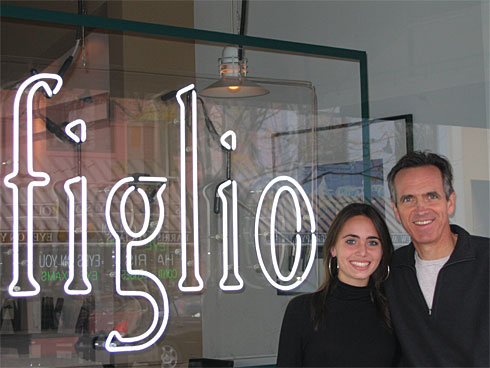 6. Starbucks You would think that a company vending paper cups on every possible street corner carried little regard for the environment; however, Starbucks Coffee is in surprisingly good graces when it comes to being green. No it's not a 'green' company but it certainly holds itself accountable through its partnerships with many environmental groups such as Conservation International and The Earthwatch Institute that might normally be naysayers toward this type of corporation. Between emphasizing maximum efficiency in its global supply chain to reduce its emissions and the fact that they save roughly 78,000 trees per year by using recycled paper, Starbucks is a corporate giant that is refreshingly mindful of its ecological impact.

7. Nanosolar There is a lot of talk about companies that are utilizing green technologies but even nobler are the companies that are creating green technologies and services - providing an option that would not exist otherwise. Nanosolar, for example, deserves praise for its progress in making solar power a viable and affordable alternative to electricity produced by coal and natural gas by way of innovation. They are able to apply a microscopic layer of solar cells onto surfaces; avoiding the use of silicon and offering comparable energy output at a fraction of the price.

8. Harbec Plastics Owner and founder Robert Bechtold was hip to the green-game before it was ever even brought to the mainstream. Long ago he tried to find investment for his company to transition into more sustainable practices but was continually denied funds because it wasn't considered necessary. These days, in a more eco-friendly era, Harbec Plastics makes tools and molds in New York in a facility powered by wind and natural gas turbines and humming with hybrid cars and trucks for daily operations. In all, these modern advancements that were originally denied have reduced the company's annual carbon dioxide emissions by 750,000 pounds.

9. Ecodrycleaner Leave it to the folks in Portland, OR to take a rather mundane standard practice and refine it for the environment's sake. Though you may have thought that the dry cleaning industry had gone as far as it could go, the Ecodryleaner model uses sustainable practices from the ground up as they refuse to use toxic solvents of any kind and employ highly efficient cleaning equipment that recycles solution in an effort to reduce waste. In addition to the eco-friendly chemicals that propel their business, they have also opted to run their facilities with the ultra clean power of the wind.

This article is brought to you by Outlet Shirts; a company that strives to be green and glorify the movement by offering organic and recycled products and holding their suppliers to a commitment to the environment a wholesale supplier of Port Authority clothing